How to make the Illinois Republican Party relevant again

How to make the Illinois Republican Party relevant again 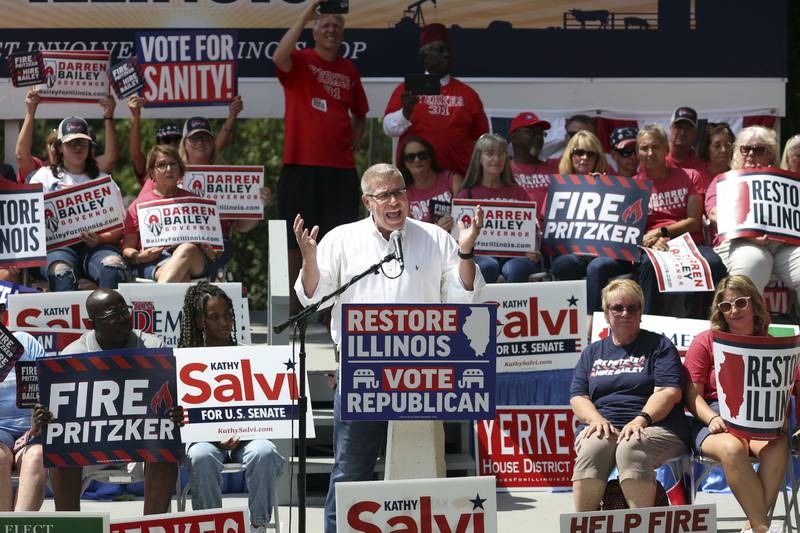 The Illinois Republican Party is irrelevant in Illinois politics. The GOP State Central Committee has no bench, no money, no ideas and no platform. Republicans hold but three of 17 congressional seats in the state. Republicans are a pitiful band of one-third, or less, of General Assembly members. There haven’t been any statewide Republican elected officials in years.

Further, the Illinois Supreme Court, with a Democratic majority for more than half a century, has always resolved political issues on a partisan basis. This election, Democrats increased their majority to 5-2.

Organized business, traditionally an ally of the Republican Party, sat on the sidelines this year while organized labor outspent opponents to eke out a narrow victory for a constitutional amendment that gives labor untold powers in collective bargaining.

Total one-party domination is not healthy. Absolute power corrupts, and Illinois already has a national reputation for political corruption.

For a new edition of a book on Illinois politics, my co-authors and I discuss “the changing faces of Illinois.” In 1970, Illinois was almost 90% white; today, it’s 60%. In the Chicago area, including the collar counties, which are traditionally white and Republican, one-third of all households speak a language other than English in the home. Downstate Illinois, with its strong Donald Trump base, is withering away, if you haven’t noticed; its population continues to decline. The action is in the suburbs.

What to do? Contrary to the adage of late U.S. House Speaker Tip O’Neill that all politics is local, American politics today have largely been nationalized by social media, Trump and the decline of local and state party organizations. Yet each state has its own issues, and Illinois is struggling with population loss, as well as job growth that has been slower than nationwide. Thus, the Illinois Republican Party needs to have a constructive, appealing program in place as the Trump phenomenon fades away.

First, take a specific, practical action: Challenge the 2020 state legislative district maps in the state courts, on the grounds of unconstitutional gerrymandering by the Democrats. Prima-facie evidence: The GOP has only about a third of the legislative seats in a state where even Republican gubernatorial candidate Darren Bailey received 43% of the statewide vote. Gerrymandering? Duh!

The Illinois Constitution requires — in two places — that legislative districts be “compact.” Yet, to achieve its dominance, Democrats drew districts from Chicago outward that look like slithering snakes, the opposite of compactness. A responsible court would have to rule the maps unconstitutional, thus creating opportunity for increased Republican Party representation.

If the state high court were somehow to rule that black is white — that is, that the 2020 slithering snakes are indeed compact — such would prove the case for all to see that the Democrat-dominated court is indeed politically corrupt, a fact Republicans could trumpet going forward.

Second, rebuild the Illinois Republican Party by coming up with a coherent platform about how to “Make Illinois Great Again.” (I am not above stealing from a great message, even if I don’t like the messenger.) This will need to be crafted by younger Republicans. I could see moderate former Republican Gov. Jim Edgar leading a task force, joined by co-chairs such as conservative downstate U.S. Rep. Darin LaHood and pragmatic suburban state Sen. Sue Rezin.

Edgar has also done a great service to our state by gathering a band of sharp young leaders of all stripes and from all parts of Illinois via his annual, weeklong Edgar Fellows Program. Many of the more than 400 fellows are Republicans; many are state legislators and mayors.

So an appeal to the Republican Edgar fellows: Join the task force. Call it the New Republican Party. Give Illinois reasons to vote Republican, especially in the suburbs.