by Maya Dukmasova and Chloe Hilles

This article appeared in InjusticeWatch on October 15, 2021 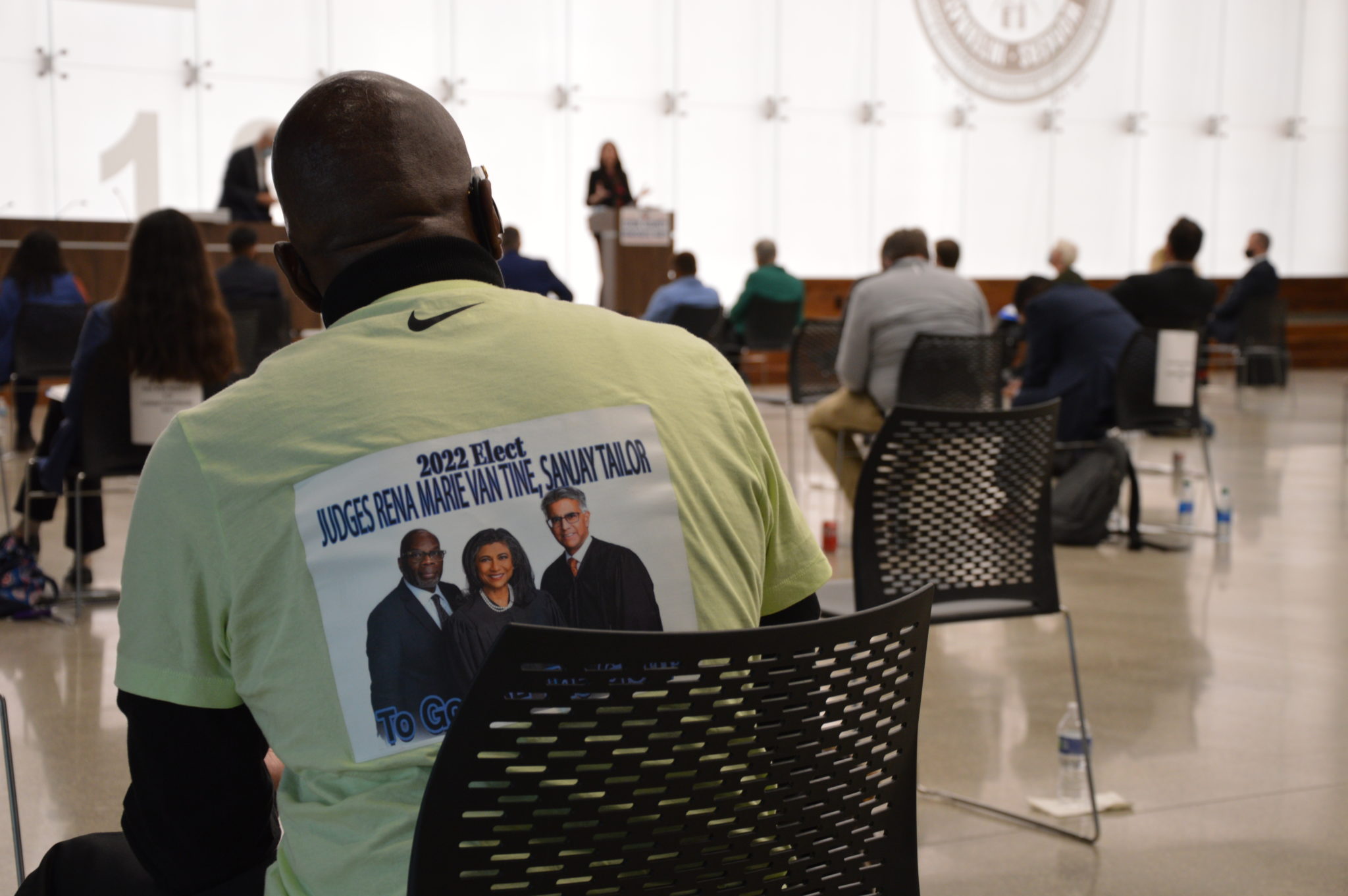 Political consultant Wallace ‘Gator’ Bradley listens to a candidate for judge make their case to the Cook County Democratic Party during a ‘pre-slating’ event on Thursday, Oct. 14.

More than 40 prospective candidates for judge presented their credentials to the Cook County Democratic committee on Thursday, seeking the party’s nomination for the June 2022 primary election.

Each candidate for circuit court and appellate court seats got about four minutes at the podium in the vast and airy union hall of the International Brotherhood of Electrical Workers Local 134 in Bronzeville to talk about their professional accomplishments, personal backgrounds, and party credentials. The audience of about three-dozen Democratic Party committeepeople had the opportunity to ask questions or to stand up in support of the candidates.

“I’m here because it’s still my vision to emulate the best judges that I’ve seen and to do better than the ones I know should have done better,” said Araceli De La Cruz, currently general counsel for the Acero charter school network. She was backed by the party for a countywide judicial seat in 2020 but lost, and now reminded the gathered Democrats of the work she’d put in for all her fellow candidates in the last cycle. “I cannot walk away from that momentum. I cannot be deterred and I won’t be. This is why I’m back again today.”

The obscure event, known as pre-slating, continues Friday with one more judicial candidate and candidates for other elected offices, including Illinois Governor, U.S. Senator, Illinois Secretary of State, and Cook County Sheriff. The full slating, where the party committee will vote on which candidates to endorse, is scheduled for December.

The judicial candidates were a noticeably diverse group, with 26 women, at least 22 people of color, and at least four openly LGBTQ candidates. They ran the gamut from first-time candidates to perennial judicial hopefuls to elected officials in other offices to appointed judges seeking a permanent circuit court seat. “I've been splitting my time between the practice of law and
being a city council member, and I have never been one
to think that I would die in office,” Brookins said.

At least twenty of the candidates for the circuit court currently work in the public sector, including three of the top attorneys in the Cook County Clerk of Court’s office, while 17 work in private practice. About one quarter of the candidates are current or former Cook County prosecutors. Four current circuit court judges are running for an open seat on the Illinois Appellate Court.

“I think this is the first time I’ve seen it this diverse,” said Clerk of the Circuit Court of Cook County Iris Martinez, who is also the 33rd Ward committeeperson.

Martinez praised the candidates not just for their demographic diversity but also for the range of professional and community service experience they represent. “It’s great to see the variety of candidates that have come through here,” she said. “Diversity really matters. I know that on the bench it really does matter because of the people who are incarcerated. Bottom line.”

The presence of three candidates of South Asian heritage, including Circuit Judges Rena Van Tine and Sanjay Tailor drew special praise from a slew of committeepeople already backing them.

“By slating me, you send a strong message to the public that you value experience and the diversity that I have brought to the court system for the past 20 years,” Van Tine said. How to become a Cook County judge: One key step, woo Dem party

After a grueling process, and a willingness to commit $40,000
to the Cook County Democratic Party, a series of judicial hopefuls
learned Friday if they passed muster. The hopes and dreams of judicial
hopefuls often rests on winning the party's support.

The Cook County Democratic Committee, led by Cook County Board of Commissioners President Toni Preckwinkle, comprises committeepeople elected in each of the 50 city wards and the suburban townships. In addition to voting on endorsements, they are responsible for heading up campaigning and voter registration efforts in their respective wards, and staffing polling places with election judges. Many of the committeepeople also serve as local alderpeople, state representatives, or county elected officials.

All candidates have to do to appear at pre-slating is sign up, share their credentials, and show up to talk about themselves, said Jacob Kaplan, executive director of the Cook County Democratic Party.

Preckwinkle opened the pre-slating Thursday with thank yous and a pitch for contributions, a reminder that party politics are as much about money as anything else. During a pizza lunch break in the union hall, she explained that her predecessor, former Cook County Assessor Joseph Berrios, started the pre-slating event several years ago to give the committee more time to get to know candidates for office.

“Slating goes like this,” Preckwinkle said, snapping her fingers in quick succession. “We had people come to slating who nobody had ever seen before and who couldn’t possibly have been slated, because they didn’t have enough years to be given bar recommendations, or they had terrible bar recommendations.” Chicago alderperson eyes a seat on the bench in 2022 election

West Side Ald. Chris Taliaferro, a former police sergeant,
wants a seat on the 11th judicial subcircuit, which covers parts
of Chicago's West Side and nearby suburbs.

The gathered committeepeople asked nearly every candidate the same four questions, which amounted to a litmus test for candidates’ commitment to the party: Do they have the support of their local committeeperson? If nominated, will they contribute funds to the party’s central fundraising committee? If they are not slated, will they run anyway against the party’s chosen candidate? And will they commit to send their campaign staff to sexual harassment training?

Committeeperson Lucy Moog (43rd Ward) asked that last question of every candidate. She told Injustice Watch that getting candidates on the record regarding sexual harassment training has been a party priority for several years. Multiple sexual harassment scandals have roiled the offices of top state Democrats in recent years.

Candidates who had a history of running against the party’s slated candidates were grilled about it on the spot. Circuit Court Judge Casandra Lewis, who is running for an

open seat on the Illinois Appellate Court, was grilled about

her decision to run previously against the Democratic Party’s candidate.

“How did you get elected to the bench the first time?” Preckwinkle asked Circuit Court Judge Casandra Lewis, who is now seeking an appellate court seat.

“Were you endorsed by the party?” Preckwinkle shot back.

“Ummm, no, I was not,” Lewis responded hesitantly.

“So you ran against the slated candidate?” Preckwinkle pressed on.

“Uh, no I don’t—I’m not, I don’t know exactly,” Lewis fumbled, as laughter rose from the audience.

Other candidates, like Thomas Nowinski, chief of staff to Martinez, and Jim Gleffe, a top attorney at the Cook County Clerk’s office, had multiple committeepeople vouch for their credentials and their party loyalty.

“I’m so committed to the Democratic Party that I actually met my wife checking petition signatures at the Board of Elections,” Gleffe said. His current boss, Cook County Clerk Karen Yarbrough, who is also the Proviso Township committeeperson, told the rest of the party leadership that she supported his candidacy, even though she’d miss him in her office.

“He deserves this, he’s done the work, and I expect him to be a great jurist,” Yarbrough said.

Once they are slated, candidates must commit to contributing $40,000 to the party to support countywide campaign activity like mailers and canvassing, Kaplan said. They also still must gather enough nominating petition signatures to get on the ballot.

Here is the list of candidates who presented for pre-slating and their current positions:

General counsel, Clerk of the Circuit Court of Cook County

Inspector General, Clerk of the Circuit Court of Cook County

Chief of staff, Clerk of the Circuit Court of Cook County