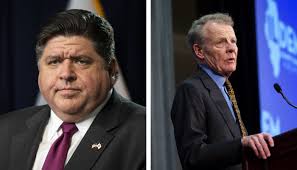 Democrats in State Legislature complicit in attempting to sweep investigation under the rug by removing investigator via rare legislative action.

The Chicago Republican Party calls for full investigation by outside counsel of the allegations raised by Illinois Republican Chairman Don Tracy concerning the protection and payoff of corrupt State employee Jenny Thornley.

“If the Governor’s Office intervened in a corruption investigation to protect an insider crony, the people of Illinois have a right to know the full story,” stated Chicago Republican Chairman Steve Boulton.

As described by Chairman Tracy and others, the allegations swirling around the Pritzker Administration reek of blocking a legitimate investigation of wrongdoing by Thornley, a Pritzker insider and past Pritzker campaign aide.

Thornley is currently under indictment for defrauding the government. In the meantime, the investigator who discovered the fraud was removed from office by act of the Democrat-controlled legislature, a virtually unheard of act that had no justification. The Chicago Republican Party is staunchly anti-corruption, and demands that the local media be as well.

“This cannot be swept under the rug with a wink to protect the Governor if the media wants to maintain the confidence of the public,” Boulton added.  “Addressing corruption in public officials is precisely why so many have given their lives in wars since the Revolution to keep a free press in existence in this country. Giving this Governor a pass would be a betrayal to both that sacrifice and the people of Illinois.”